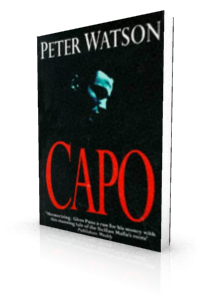 Sicily, 1879: After successfully smuggling a severed human ear past the police, Silvio Randazzo completes his dangerous first rite of passage–from peasant boy to Mafia soldier. The ear is a chilling ransom demand from Antonino Greco, Italy’s most famous and feared Mafioso. But it is not until Silvio makes his first vendetta killing that he truly “makes his bones” as a worthy member of the society that values honor above all . . . and rewards betrayal with death.

New Orleans, 1880: By exterminating the rivals of Angelo Priola, the most powerful gangster in America’s most decadent city, the newly arrived Silvio makes his mark in the fledgling underworld of his new homeland. As the forces of the law close in on the notorious Greco, and dangerous new players vie for Priola’s territory, the cunning, ruthless, and ever more ambitious Silvio watches the path made clear for his ascension to the throne of Capo–boss of bosses. . . .

Based on fact, here is a stunning novel of the criminal empire that brought the mob to America, and the man who oversaw its bloody birth. . . .

"Mezmerising. Gives Puzo a run for his money with this stunning tale of the Sicilian Mafia’s roots."