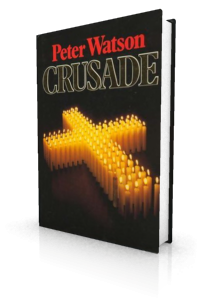 ‘Crusade’ imagines the first American Pope – not unlike Obama. But this good man is upset by the amount of poverty in the world, and the unused riches in the Vatican. Inspired by an eruption in Foligno, a city in Italy’s earthquake zone, the new pope decides to auction off Raphael’s ‘Madonna of Foligno‘, one of the Vatican’s Renaissance masterpieces, using the proceeds to aid the earthquake victims. The sale is such a success that the Pope now decides to sell off most of the Vatican’s art, to aid the world’s poor.

The auction – the greatest art auction ever held – is a resounding success, financially, raising billions of dollars for charitable causes dear to the pope’s heart. Unfortunately, with so much money at his disposal, the pope’s attempts to help the world’s poor quickly acquires political overtones, and brings him up against some of the world’s most powerful politicians, the President of the United States not least among them.

Conflict looms and the action builds to a spectacular climax when the pope visits Sicily, where the mafia have as much interest in the poor as do popes and presidents.

"Non-stop action, an incredible vortex of fights and frauds."

"Crusade’s real edge is that it could be next week’s news."