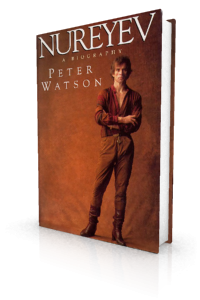 Nureyev was the greatest male dancer of his generation but was also a great romantic star both on- and off-stage. He was born on a train, grew up in poverty and began his performing life at folk dances in his village. He progressed rapidly to the Kirov, but his defection in 1961 was arguably his biggest performance of all. Peter Watson, the award-winning Observer journalist, approaches Nureyev both as a ballet star of technical genius and as a bisexual loner and political exile. The Fonteyn-Nureyev relationship is examined both on- and off-stage, aided by much new and controversial material, while Watson has interviewed dozens of Nureyev’s friends and colleagues all around the world, travelling throughout Europe, to New York, to Moscow and St. Petersburg. He was the first writer to visit Nureyev’s childhood village after his death, and the first to interview the remaining members of his family there.

Reviews of Nureyev: A Biography

"It’s a fantastic life, the stuff of fairytales … (Nureyev) could be the hero of a Grimm Brothers story or an Eric Ambler thriller, either or both at once."