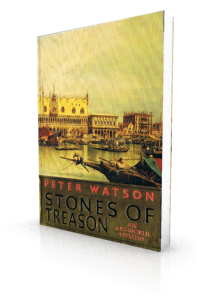 What would happen if Greek extremists blackmailed Britain into returning the Elgin Marbles – particularly if the blackmail involved the Queen, and dark secrets about her uncle’s – the Duke of Windsor’s – past?

Stones of Treason is a topical thriller, which includes the Queen herself among the cast, and begins when a painting by Raphael is sent anonymously by post from ‘The Apollo Brigade’ to Edward Andover, Surveyor of the Queen’s Pictures. This is followed by two other paintings, all three looted by the Nazis during World War Two. Andover soon finds himself not only preventing public exposure of secrets from the Queen’s family past but fighting a demand for the return of the Elgin Marbles – a demand which turns into violence and murder as the identity of The Apollo Brigade becomes known.

Reviews of Stones of Treason

"Intelligent action in a realistic thriller."