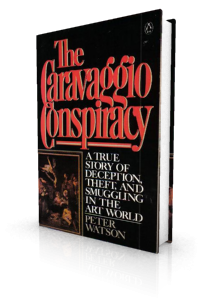 As the subtitle explains it: How five art dealers, four policemen, three picture restorers, two auction houses and a journalist plotted to recover some of the world’s most beautiful stolen paintings.

Peter Watson went under cover, as ‘A. John Blake’. With the help of Sotheby’s and Christie’s he was able to pose as a wealthy but shady art dealer, sinking into the art underworld on both sides of the Atlantic. In this gripping narrative he shows how paintings stolen in Italy surfaced in New York – smuggled into America by a Roman Catholic priest in the Diplomatic Bag.

Reviews of The Caravaggio Conspiracy

"An enthralling account … No thriller with manufactured irony could provide a better ending."