Nature and Human Nature in the Old World and the New 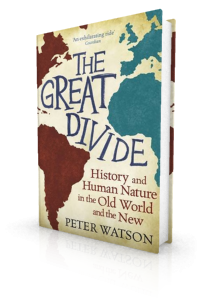 In 15,000 B.C. early humankind, who had evolved in Africa tens of thousands of years before and spread out to populate the Earth, arrived in Siberia, during the Ice Age. Because so much water was locked up at that time in the great ice sheets, several miles thick, the levels of the world’s oceans were much lower than they are today, and early humans were able to walk across the Bering Strait, then a land bridge, without getting their feet wet and enter the Americas.

Then, the Ice Age came to an end, the Bering Strait refilled with water and humans in the Americas were cut off from humans elsewhere in the world. This division – with two great populations on Earth, each oblivious of the other – continued until Christopher Columbus ‘discovered’ America just before 1500 A.D. This is the fascinating subject of THE GREAT DIVIDE, which compares and contrasts the development of humankind in the ‘Old World’ and the ‘New’ between 15,000 B.C. and 1500 A.D. This unprecedented comparison of early peoples means that, when these factors are taken together, they offer a uniquely revealing insight into what it means to be human.

THE GREAT DIVIDE shows that three factors above all account for the different civilisations in the Old World and the New – weather, which is much more violent in the New world, domesticated mammals (the New world didn’t have any, to speak of), different vegetation (cereals in the Old world, hallucinogens in the New). The book offers a masterly and totally original synthesis of archaeology, anthropology, geology, meteorology, cosmology and mythology, to give a new shape – and a new understanding – to human history.

Reviews of The Great Divide

"The past, Peter Watson argues in this magnificent history of sixteen and a half millennia, is a whole series of foreign countries … Impossible, of course, to summarise this massive book in a small review. Sufficient, perhaps, to say that the year’s first necessary read is here."