The Biography of a Renaissance Masterpiece 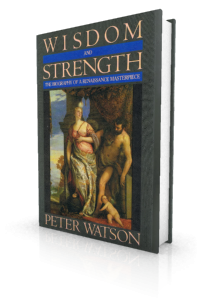 Paolo Veronese’s Allegory of Wisdom and Strength is one of the world’s most distinguished old master paintings. It is acclaimed for its technical virtuosity but also for its incredible journey through history. During more than four centuries it has been a silent witness to great political dramas – war, abdication, revolution and attempted assassination; to the personal tragedies of Emperors, Queens, the royal dukes of France, and corrupt cardinals of Italy. And it has belonged to twenty-three of the greatest collectors in history.

Today it hangs among the Raphaels, Rembrandts and Renoirs of the Frick Collection on New York’s Fifth Avenue. Its exuberant colours and opulent figures betray none of the horrors of the plague that raged outside Veronese’s studio in sixteenth-century Venice. Nor does its uplifting moral message hint at the turbulence and corruption it has observed over the past four hundred years as it travelled from Venice to Prague to Stockholm to Brussels, to Rome to Paris to London and Manhattan.

Most Old Masters have hung on one wall all their lives, but not this one. Its history encompasses the history of collecting. It has been everywhere that matters.

Reviews of Wisdom and Strength

"One of the books of the year."